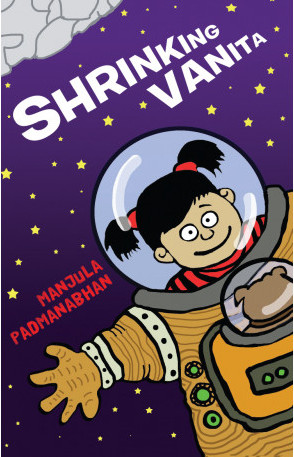 We have news for you!

Remember we had some questions for Abhay and Nanditta of Can’t Stop Cody fame regarding their reasons for locating the story in San Francisco? Well, guess what? We asked them and they wrote back. Here is the letter, pasted below. Be sure to read right to end for the surprise!

Abhay wrote:
Thank you for selecting Can’t Stop Cody for the book club. Cody and I live in San Francisco. And his adventures happened in SF, a city that both of us love and know well. That’s why we set it in SF. However Cody has actually spent almost a whole year in India and during that time he had many adventures including jetlag in Bombay, encounters with cows in Bhopal, and a long train ride from Bhopal to Bombay.

Readers will be able to read about them in the next installment of Adventures of Cody: Cody goes to India.

Isn’t this fantastic?! And Manjula Padmanabhan wrote back too, to tell us why she chose a dog, and a Pug in particular, to accompany Vanita into space in Shrinking Vanita. BTW, Shrinking Vanita was the children’s choice for an award at the Peek a Book Children’s Literature Festival! Yay!

This is what Manjula wrote:
I am so glad you sent this urgent question my way. I am happy to say, there IS an explanation. The point to keep in mind is that the creature has to be REDUCIBLE BY HALF. And also small enough that it can be contained easily AND VISIBLY in front of a little girl. Now then! A mouse would never do under such a circumstance, being too small and also too fidgety. A mouse does not sit still and gaze longingly into one’s eyes the way that a dog does! Also their eyes are on either side of their little heads so it’s not easy to gaze into them.

As for a cat, well! Need I really explain that cats simply do not take well to being asked to do ANYTHING? If Vanita had placed a cat inside its own space suit it would immediately turn itself upside down so that she would have only its tail to look at. If it did keep its head inside the helmet, it would surely want to turn around and look at the scenery outside, not at Vanita. It would refuse to do as it was told because that’s what cats are like!!!

Okay, and finally, why a PUG? Why not a Chihuahua, Fox Terrier, Dachshund, Shih Tzu, Pekinese – or any of the other dog breeds that would fit inside a small space suit? Because a Pug has a flat face. Having a flat face was useful under the circumstances because of the shape of the helmet. A Dachshund is in my opinion the ideal dog to own as a pet, but its pointy face would be less ideal for the purpose Vanita had in mind. Chihuahuas have huge eyes and their noses aren’t that pointy but (in my opinion) they are just a little too dainty. Also, by temperament they are extremely excitable.

The dog Vanita wanted had to be calm as well as solid enough to be easy to
hold and at the same time not too heavy to place inside that front compartment. And it couldn’t be any of the other small dogs with flat faces because they all have long hair that gets into their eyes.
And finally: a Pug because they are SOOOOO CUUUUUTE.

We completely agree with you, Manjula!

The only sad thing about our last session of the first round of the Tulika Book Club is that we were like the title of an Agatha Christie book: ‘And Then There Were Two-and-a-Half’ just about describes the attendance of Janani and Atharva, the half being contributed by Ansh who’s tummy suddenly started misbehaving and he had to rush back home. Oh well, who can compete with exams and holidays.

But we three-and-a-half and then three came up close and personal with Pippi Longstocking’s mad adventures with two thieves and Oscar Wilde’s fairytale about the selfish giant. While the consensus was that Pippi was quite crazily unstoppable, the selfish giant’s story was happy and sad. Remember what Hajara said about opposites going together in a story? That’s so true, isn’t it?