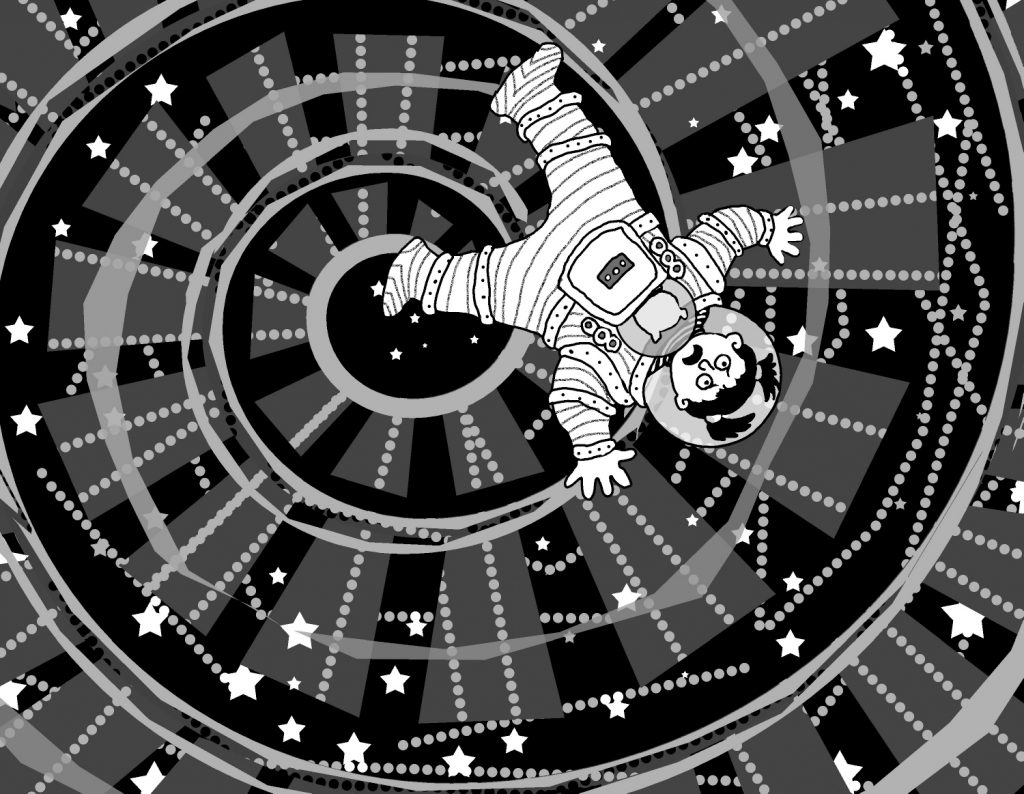 Despite missing three members, this was perhaps the noisiest session yet. Everyone had lots to say, first about the stories they were writing, and second, about Manjula Padmanabhan’s Shrinking Vanita. It’s a fun fantasy story about a 10-year-old who is unusually short but who is far from short on ideas and action. Has that whetted your appetite? It’s got asteroids and a pug and a tv station and the world ending…. Don’t you want to drop everything and grab that book to read? Go for it!

Would you believe it, though, some people in our group, yes, in our group, were so busy during the two weeks since we last met, that they didn’t have time to read Shrinking Vanita. No time! 7, 8, 9 and 10 year-olds. No time! Now this news is worse than the news about an asteroid smashing into Earth in three days. I mean, who doesn’t have time to read a storybook. Honestly. I am 62 and well, you could say I have all the time in the world given that I don’t go to school or college or even to work. But I work. At home. All the time. And I have been to school and college and office. But I have NEVER EVER STOPPED READING STORYBOOKS. I would die, I think, if I did. Or, to put it differently, you would know I was dead the day you heard I wasn’t reading.

Anyway, now that that’s out of my system… Besides, Ansh said that although he had not read it, he knew it. Udbhav and Advait had read it long ago. “I was the first one to buy the book and have it signed by the author,” said Advait, much to some others’ envy. Mine too. Anyway, for the sake of those who hadn’t yet read the book, we read aloud bits of it, with those who knew filling in some gaps.

Most of those who had read SV said they positively LOVED it. Those who were listening to it also thought it was great. It was funny. It was exciting. It was adventurous. “Actually, it is funny and it is serious,” Hajara said. “It has opposites.” (I am not quoting her verbatim, she said something like that… remember, I am 62.)

“Oh!” said Varshini, her eyes lighting up. “I like how she says that. I will remember this in future when I read.” (again, not verbatim) Then we had a heated discussion about the pug, Giggles, who helps Vanita save the planet. Why a dog, why not a cat or a mouse or any other animal, that was the question. A dog’s obedient, was one reason. A cat scratches, was another. And a pug’s just the right size, was yet another. But we couldn’t come to any satisfactory consensus, so we decided to write and ask Manjula herself. That onerous task is upon yours truly.

What about fantasy? “Oh, that’s when there’s something magical happening,” offered Vaishali in a soft, soft voice. “I was also going to say that,” said Atharva. So, what are some of the well-known books that are fantastical, magical…? Blank faces, even the effervescent Udbhav remained silent. How about Alice in Wonderland? OH I KNOW THAT YES OF COURSE…. The chorus was loud and spontaneous. And Peter Pan…. YAAAAAAA I KNOW I KNOW WENDY I LOVE TINKERBELL…

We sat thinking for a while about Manjula’s description of a butterfly and the surprising fact of its weight for a thing that seems so weightless, and then we remembered how mightily we’ve been set upon by mosquitoes and felt the full force, literally, of their attack. “I’m scared of butterflies,” said Advait and for once everyone received this piece of information in stunned silence. “I don’t know why.” Is there a story there, somebody?