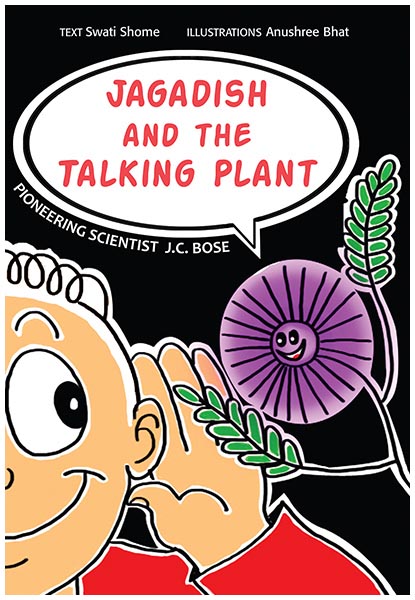 In the early 20th century, after making pathbreaking innovations in wireless communication, pioneering scientist Jagadish Chandra Bose (J.C. Bose) turned to the world of plants. Merging the boundaries of biology and physics, he became a forerunner of biophysics, inventing ingenious instruments to study plant intelligence. His research remains radical even today, more than 150 years after his birth. In this first-of-its-kind comic book, the maverick scientist’s journey is imagined through the eyes of Mimosa Pudica — the ‘touch-me-not’ plant he used extensively in his research. Extracts from a well-known speech and an entry from Bose’s own journal offer a direct glimpse into a fascinating mind. A crisp timeline gives an overview of his life, while humorous asides and quick facts pack in a punch.

“Since a great deal of Sir Bose’s life dealt with the physiology of plants, the author, Swati Shome and illustrator Anushree Bhat, have taken the interesting route of making Jagadish have a running conversation with a “Mimosa Pudica” – a touch-me-not plant. They also have a couple of birds show up from time to time during the narration in order to provide comic relief. These characters stay with Jagadish as he proceeds through childhood and adolescence into a promising career in the West in the Physical Sciences. When, after completing his education, the young Jagadish comes back to India and accepts a position at Presidency College in Kolkata, the author attempts to explain scientific concepts to the reader as simply as possible. This lightness in the narrative is one of the strong points of this book.” – Goodbooks.in