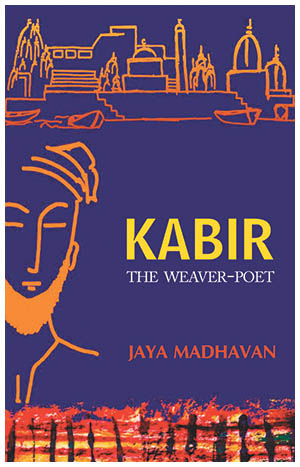 Mystic weaver, radical reformer, loved and hated equally in his time . . . the simple wisdom of his pithy couplets, the famous dohas, makes him one of the most frequently quoted poets even today. Yet Kabir the person remains an enigma. This brilliant novel traces one day in Kabir’s life, from Daybreak through Midday to Nightfall. Threading fact, legend and poetry into a superbly structured narrative, it etches Kabir’s compelling persona against the backdrop of fifteenth century Banaras — a period that mirrors quite remarkably our own troubled times. Spare visuals before each section continue Kabir’s own favourite metaphor of weaving, a delicate tapestry of the city unravelling as the day progresses. Kabir the Weaver-Poet is a landmark in contemporary writing for young readers and old — thrilling yet gently emotive, incredibly blending high drama with the mesmerising calm of Kabir’s beliefs.

Jaya Madhavan’s retelling is well written and makes some very complex issues – communal hatred, intolerance, caste, even the frightening phenomenon of mob frenzy – accessible to young audiences. I liked the spareness of her writing style, very much in keeping with the simplicity of the man at the heart of this book. She adds a dash of fantasy too, inventively casting the tools of Kabir’s trade – Dhaga, Takli, Warp, Weft, Spindle – as narrators and loyal friends of the poet. Much like the sutradhar of traditional folk theatre, they are more than merely detached story tellers;through their playful banter, their squabbling and occasional bits of role playing, we get a glimpse of Kabir’s life and his effect on people around him. – Saffron Tree